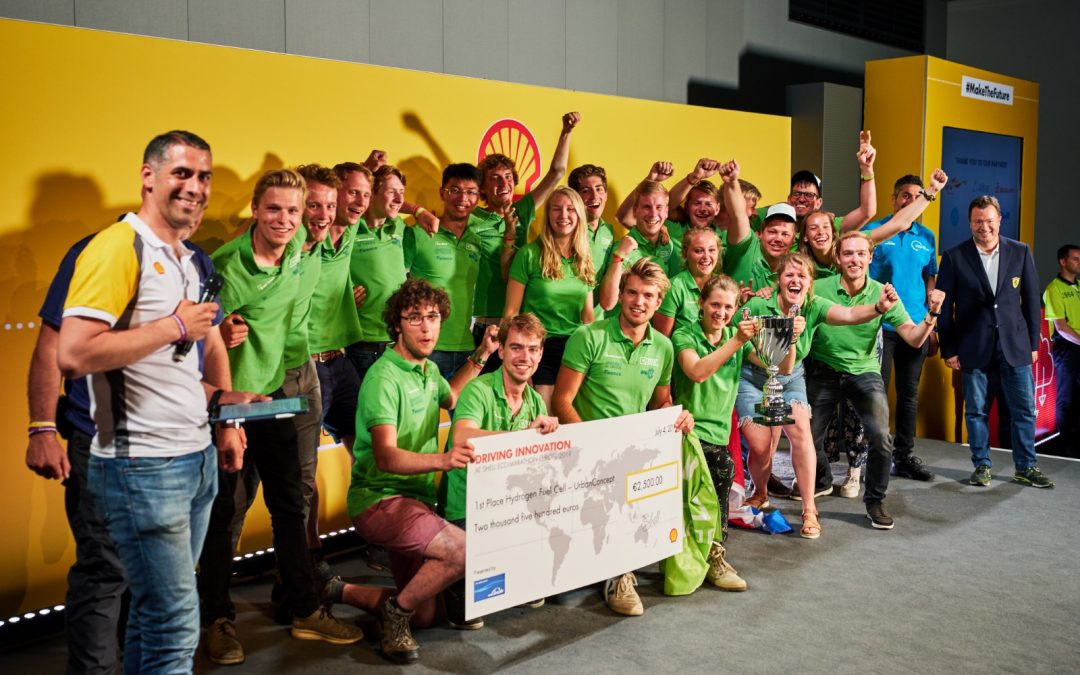 Green Team Twente won the Shell Eco Marathon in their Urban Concept category yesterday. Today, the team is going for the icing on the cake, by trying to win the Drivers’ World Championship, on the same track in London.

‘When we got on stage at the award ceremony, that was the moment when we fully realised what we achieved,’ says team member Gidde Tuitert. ‘This is the pay-off for a year of dedication and teamwork.’

Green Team Twente operated quite flawlessly at The Shell Eco Marathon in London, says Tuitert. ‘Our first try on Wednesday was already a very good result. Our second run didn’t quite work out. After ten out of eleven laps, our hydrogen tank was empty. But we knew we had two more attempts to go. In the end, the third and fourth attempt were flawless. We managed to reach an efficiency of 242 kilometres per cubic meter. That is the equivalent of driving 760 kilometres on 1 litre of gasoline.’

Icing on the cake

After receiving a cup and a cheque worth €2500, it was time for a party. ‘But not until late at night,’ says Tuitert. ‘We had to get up at 6 am. Today, we’re competing in the Drivers’ World Championship, on the same track. We will compete against the teams from the other classes of the Shell Eco Marathon. This time, it’s not about being the most efficient, but about who crosses the finish line first.’

The students from Twente are hopeful they will be the first to finish. ‘We know our car can reach the maximum allowed speed of 40 kilometres an hour. And we’ve noticed that other competitors will struggle to reach that speed,’ says Tuitert. ‘But winning this race would be something extra. Icing on the cake, so to speak.’

Another way of winning more prizes could be in the off-track awards. ‘For whoever is the best communicating team or has the most innovative car, for instance,’ says the Green Team member. ‘After the victory yesterday, everything would feel like a bonus.’