Not one, not two, but three trophies! Green Team Twente is now on its way back to Enschede with three awards. Not only did we win the Shell Eco-Marathon, but also the Communications Award and the Driver’s World Championship (DWC)! This means we are now World Champions! In this newsletter, we will tell you more about how it all went down. For a summary of this week, scroll down further! 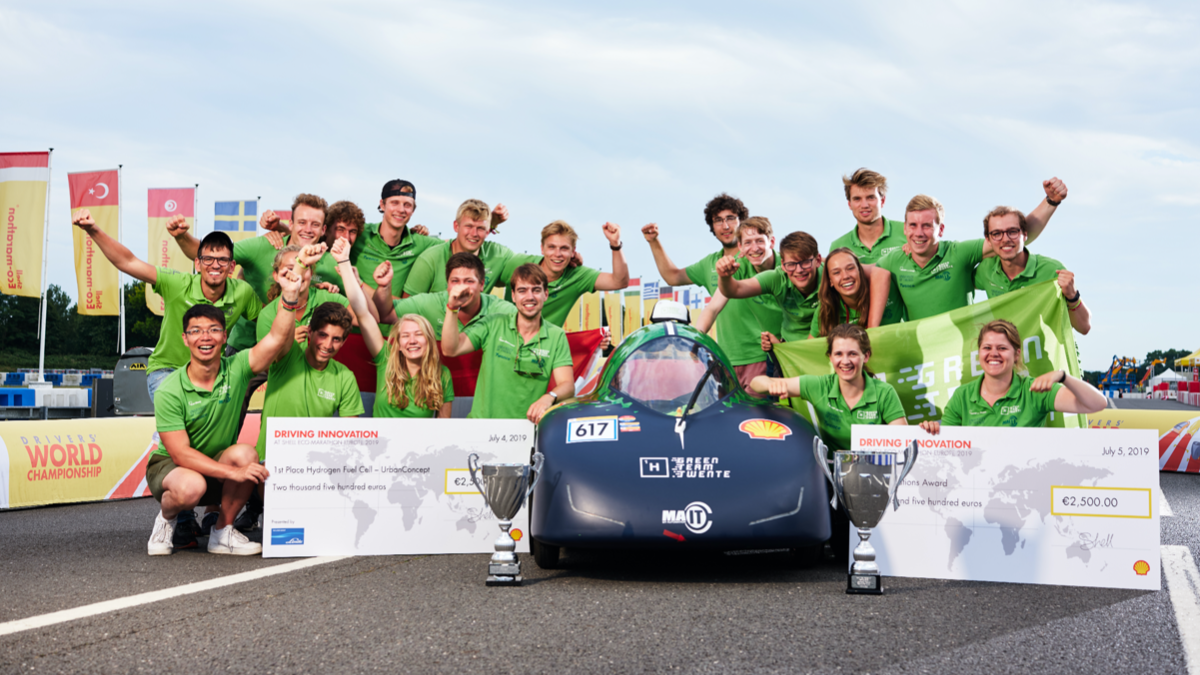 Drivers’ World Championship
After winning the Shell Eco-Marathon, we were allowed to participate in the DWC. This is a race about speed, instead of the highest efficiency. However, efficiency is still the main theme of the race. The top 3 UrbanConcept cars of every energy type (Battery Electric, ICE and Hydrogen) of the Shell Eco-Marathon Europe may participate in this race. Those nine cars are competing against each other to be the first to complete 7 laps on the track.

Every car gets an amount of energy that is related to the energy that was used in the best attempt of the SEM, but then recalculated to 7 laps instead of the 11 that we drove in the Shell Eco-Marathon. All the winners of every energy type get 5% extra, so that means us as well! The start position of the cars is chosen randomly. We were lucky because we could start in the first position! 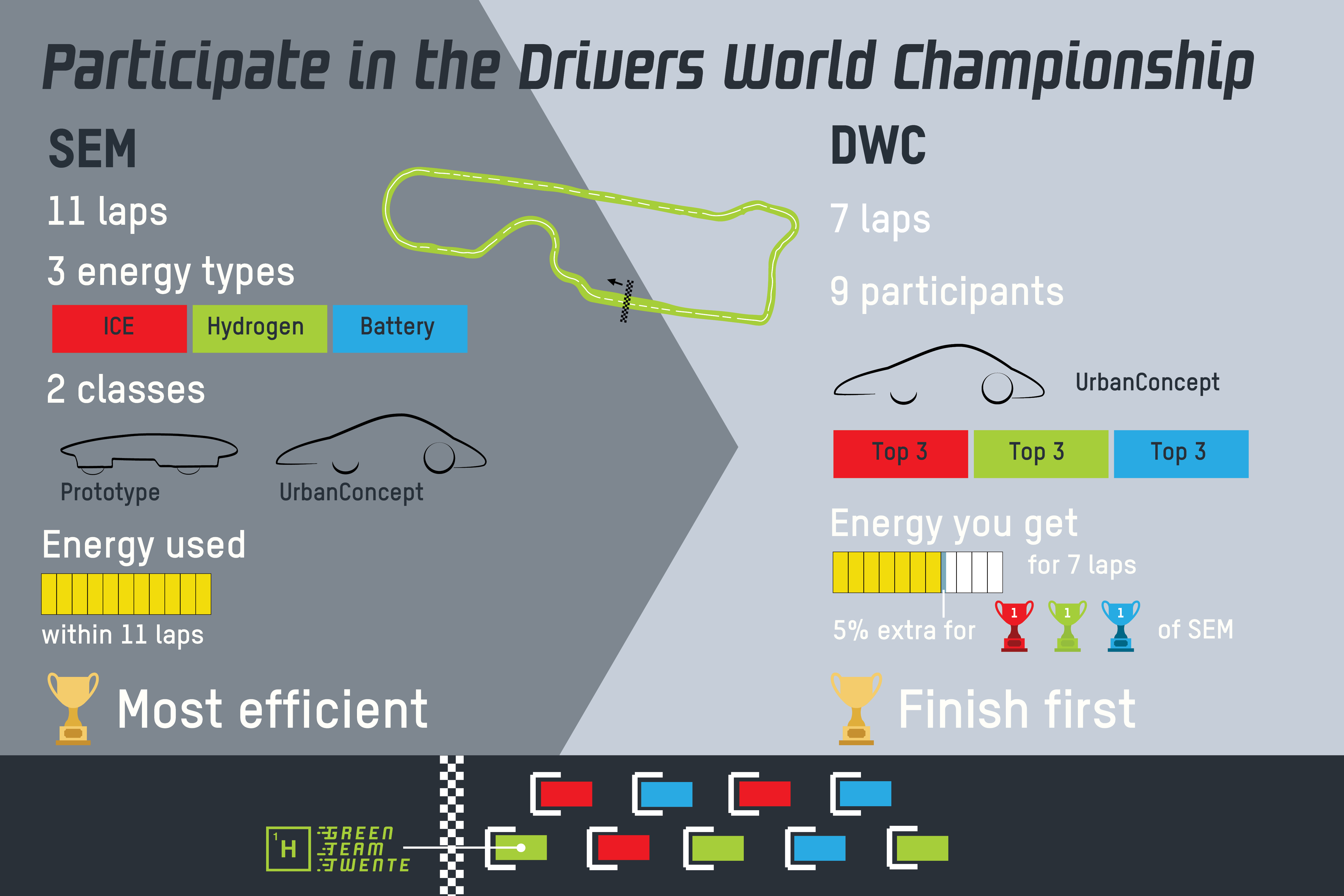 We started the morning with a briefing and an extra technical inspection, to check if we adhere to the extra rules that are set for this competition. Since the race has a mass start, there had to be an order in which the teams would start. This was chosen at random, and we were very lucky to be starting at the front! After this, we had a practice race with all of the 9 teams with only 4 laps, which we ‘won’ big time! This gave us good hope for the real race, which took place at 16:00 local time. 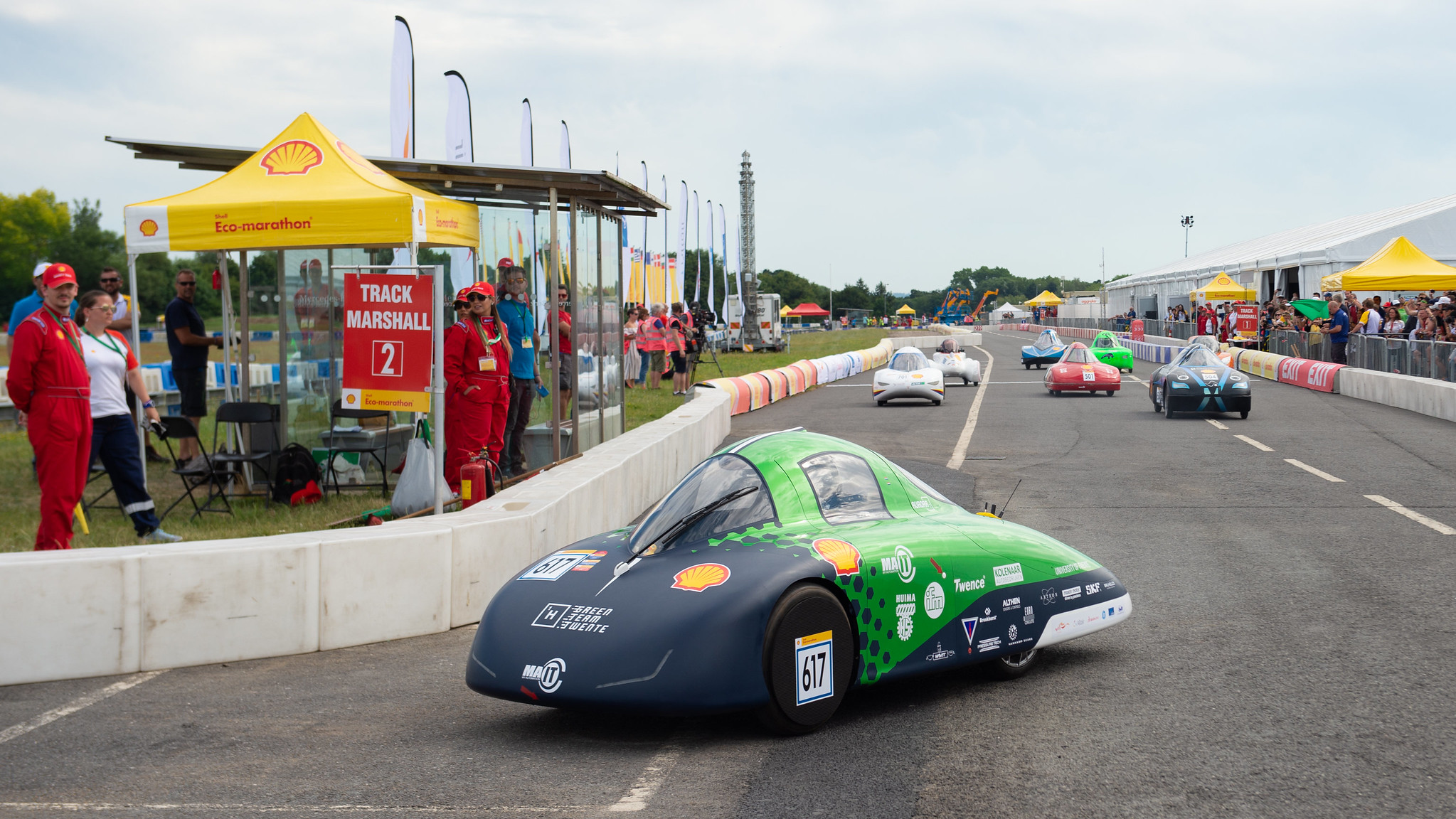 Team Green Team Twente, race number 617, from University Of Twente, Netherlands, competing in the UrbanConcept-Hydrogen category with their vehicle, the Aurora One, eventual 1st place winner, leads the race on the track during the Drivers World Championships on day five of Shell Make the Future Live 2019 at the Brooklands motor racing circuit, Friday, July 5, 2019, Weybridge, Surrey, UK. (Mark Pain/Shell)

The race was more exciting and nerve-wracking than any race we had done before, but luckily we quickly had a head start on the rest of the teams. Our strategy was to accelerate really quickly, so the other teams couldn’t catch up with us since the maximum speed was only 40 km/h. During the year, we engineered the new drivetrain to be able to accelerate very fast and efficiently at the same time, especially for the Drivers’ World Championship.

In the last rounds, we even lapped a few cars! After the 7 laps, we finished first. This means we are now European Champions and World Champions! We were the first European car to win the DWC and besides that, the first hydrogen car! Below, the top 3 of the DWC!

Communication award
Friday afternoon, the ending ceremony was held. Apart from the on-track awards, the winners of the off-track awards were also announced. At this moment, it was announced that Green Team Twente had won the Communications Award. For our diverse content, activities and strong brand it was decided that we had the most thought-out communication strategy. This means we are the third year in a row that the Communications Award has been given to Green Team Twente!

Our Shell Eco-Marathon
The Shell Eco-Marathon 2019 has been a great experience! We started this week not knowing how our car would compare to those of other teams. On Friday the 28th we arrived in the UK and our journey began. Luckily, we passed the technical inspection really quickly and without much trouble. This gave us the chance to make plenty of use of the practice rounds and make final adjustments to the car. The first competition day went well with good results for the first attempt. On the second day, unfortunately, the second attempt was not valid, as our hydrogen bottle ran out during the race. The third and fourth attempt went really great as well, which ultimately led us to victory. This meant we were the hydrogen UrbanConcept winner of the Shell Eco-Marathon 2019.

With this, a ticket to the Driver’s World Championship (DWC) was secured. On Friday, we had the technical inspection for the DWC and subsequently the race itself. This went great, as we finished first with great distance from the second car. This meant we had the world’s fastest energy-efficient car. However, this wasn’t our last award of the week, as it was announced during the ending ceremony that the Communications Award was also ours. With three rewards we’ll be heading home, back to our Future Factory.

Thank you all!
This has been it for Green Team Twente 2019! We want to thank all those who helped us make this year the great experience it has been, especially our partners and the team of 2018! We met with great and interesting people and learned their stories, both from our partner network and outside. We gained in-depth knowledge of our car and all kinds of technologies related to it. Over the year, we got to work with and befriend people of all disciplines and nationalities, which we are really thankful for.

This summer, it’s time to pass on the torch to the team of 2020. We will look back at this year with very much pride, with this week as an award on our year! We hope that the new team will learn all that we learnt in our year and more. They will develop their own skills, work towards a sustainable future and bring Green Team Twente to the next level, with making many mistakes and learning from it. A lot of luck to the next team and we hope that they will have just as much fun as us.